Qualities:
The Blue Lace Agate variety is a very cooling and calming stone, endowing us with a sense of peace and tranquility.

A powerful throat healer, it assists with verbal expression of thoughts and feelings. Blue Lace Agate is a great nurturing and supportive stone, neutralising anger, infection, inflammation and fever.

Blue Lace Agate helps to strengthen and accelerate the repair of bones, thyroid deficiencies, throat and lymph infections. It soothes red, sore eyes and any skin problems associated with redness and irritation. 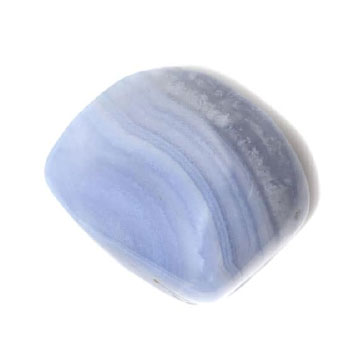 The Blue Lace Agate is a beautiful stone, looking like sky blue waters with a rippling effect. It has a soft, soothing effect on the emotions of a person. It calms the nerves and stimulates encouragement and positivity in a person who uses it.

The blue agate is the stone of communication or the stone of diplomat as it assists in communication where angry words must be avoided and where a clear understanding is required. It also comes in various other forms and hence it is also called the earth rainbow because of its varied coloured forms.

The blue agate was discovered during the times of Babylon. The agate was used as a medicine in the ancient Greek and Egyptian civilisation. Though the intensity and frequency of vibrations of the agate is quiet low but still it has a strengthening and stabilizing effect.

Ironically the blue lace agate is not a stone of protection but rather a stone of support, encouragement and inspires loyalty and trustworthiness in the person wearing it. It removes fear from one who has a phobia to speak in public or hesitates in speech such as teachers, professors, directors or leaders, managers etc who lead a team in any corporate work environment.

It is from the crystal family and hence an orgonite which helps transform all the negative energy or orgone into positive vibes. It has all the calming properties and helps in combatting suppression of feelings caused by judgements, fears, rejection etc. It provides new ways of expression and growth and de-stresses the person.

The blue lace agate is  acrystal which can be used during pregnancy and also helps in lactation in mothers if it is worn in between the breasts. It also promotes self-confidence and self-worth which is scarce nowadays with the growing competition. It is used in amulets and talismans.

The physical healing properties of the agate are relieving throat ache, thyroid issues thus mainly concentrating on the throat chakra of our body. However it also helps soothe the third eye or the brow chakra by giving the wearer clarity of thought, increasing positive vibrations encouraging compassion and inner stability. It helps balance energies and is also used in meditation.

As an orgonite the blue lace agate is oneof the most benefitting and useful orgonite. Infact it is a seeker transformer crystal which changes grave situations in people’s lives thereby changing their lives.